Which coalition contenders are most economically compatible? 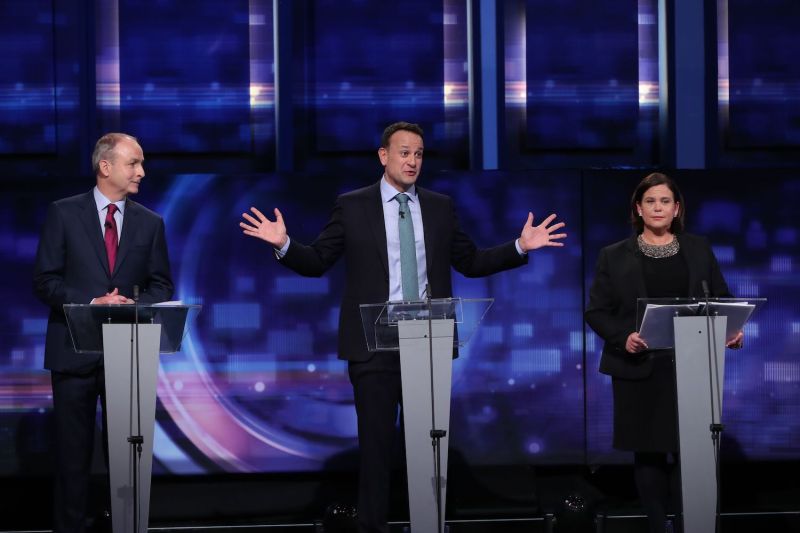 In keeping with the times, let’s quote Vladimir Lenin. The Communist leader, looking back on the October Revolution and seeing it in the context of what had gone before in Russia – from late 19th-century Tsarist reforms to the 1917 Bolshevik takeover – quipped “there are decades when nothing happens and then there are weeks when decades happen”.

Believers in the Leninist world view of big epochal moments might be tempted to conclude that Irish politics has just witnessed one. By this analysis, the previous status quo has been shattered, and a new paradigm is taking shape, whereby old people vote Fine Gael or Fianna Fáil, and young people vote Sinn Féin.

At first glance at last week’s election results, it’s easy to conclude that the future is Republican, that the Fine Gael or Fianna Fáil support base is dying, and that Sinn Féin is the party of the future.

But you could also take the more nuanced view that youth voters have “lent” their vote to Sinn Féin, in the hope that party will fix the housing crisis, taking the pressure off the bottom of the housing market. If that adjustment is made successfully, rents and prices will fall as supply expands.

In that case, one of the immediate reasons for voting Sinn Féin dissipates. Subsequently, the youth vote may scatter towards other parties as voters garner the “stake” in society they have been missing.

We can call this the “ballast” approach to politics. Society has lost its ballast because the property market is not working, but once it is fixed, things will settle down again to the benefit of other parties, including the two largest ones. This view regards the voter as promiscuous rather than committed.

Implicit in this idea is that, rather than rewarding Sinn Féin for success in delivering housing, the electorate may punish the party – if it goes into government – for its success, by moving on to other issues. This could allow an opposition to regroup and punish Sinn Féin in the next election.

The voter as a single-issue individual rather than a member of any broadly based movement is a persuasive interpretation of politics as we go into the third decade of the 21st century. The recent memory of Fine Gael being the party of Repeal, feted by the young liberal vote, only to be abandoned at the polls by many of the same people less than two years later, supports the “promiscuous voter” theory.

We are now in the haggling phase of forming a government. The electorate signalled change but didn’t give any one party the means to affect that change. In reality, Sinn Féin won a very inconclusive election. Seventy per cent of voters voted for someone else. As Bill Clinton quipped “the people have spoken, but no one is quite sure what they have said”.

The broad left coalition could only rule as a minority government susceptible to constant ambush from the centre ground. Fine Gael, Fianna Fáil and the Greens could form a comfortable government numbers-wise, but they may not want to. The two bigger parties need to maintain the illusion of fundamental difference to allow them to exist as separate entities.

We hear a lot about distinctions between the parties, which prevent easy coalitions. But is that the case? On economics what are the big cleavages that prevent either a Fianna Fáil-Fine Gael-Green coalition or a Sinn Féin-Fianna Fáil-Green and/or Social Democrat coalition? Could such apparently diverse parties come up with a cohesive economic plan?

On most of the big issues there’s not much between the parties. They are all broadly pro-EU. On a united Ireland, Mary Lou McDonald has already said that a Border poll can wait. And all parties support the 12.5 per cent tax rate.

The differences are more pronounced on income tax – though no party is advocating steep income tax cuts. Despite talk of the tax system favouring the rich, the figures show definitively that the Irish income tax system is quite progressive.

The top 1 per cent of Irish earners, those who earn more than €200,000 per annum, pay 26 per cent of all income tax and the universal social charge. This is a significant burden being paid by a small minority of rich people.

These people could expect Fianna Fáil or Fine Gael to look out for their interests. The Fianna Fáil, Fine Gael and Green Party manifestos propose no significant change at the top.

Sinn Féin, on the other hand, advocates a 5 per cent levy on those with incomes over €150,000 per annum.

Fine Gael wants to broaden the tax bands for single people to make sure they don’t hit the top band at too low an income, but frankly the differences in income tax policy between Fianna Fáil and Fine Gael are small, and a matter of degree.

The Green Party and Sinn Féin both propose wealth taxes. For the Greens, it would be a wealth tax on super-rich individuals with more total wealth of more than €10 million. Sinn Féin wants to introduce a 1 per cent tax on assets worth more than €1 million.

Sinn Féin also wants to eliminate a special relief availed of by foreign executives who work here and earn over €1 million. This was brought in to attract multinational decision-makers, senior people who it was thought would have a material say in their companies’ planning in Ireland. The idea here is that the more multinational decision-makers (and their families) you have resident here, the more likely the company is to expand and deepen its roots here.

Parties of the left have portrayed Ireland as some sort of profoundly unequal oligarchy. But the figures tell a different story. We actually have a highly interventionist system, where high tax on top earners dramatically reduces the take-home differences between the rich and the rest.

If Ireland did not have such a progressive system (in which the rich pay more tax), inequality in Ireland would be extremely worrying. But because the system redistributes income by not taxing low earners and taxing high earners, after-tax inequality in Ireland is bang in the middle of the EU average.

The potential coalition partners appear to be broadly in agreement on preserving the central aspects of the tax system. Most wealth in Ireland is tied up in property and Sinn Féin, uniquely among the international left, is opposed to property tax.

Therefore, the battle ground is on income tax. Sinn Féin will definitely go after the upper middle-class voters. Fianna Fáil, Fine Gael and the Greens might be squeamish about this. But the differences don’t seem insurmountable.

In policy terms, there’s enough common ground on taxation for these guys to do a deal. If coalition talks fail, it’s unlikely to be over economics.