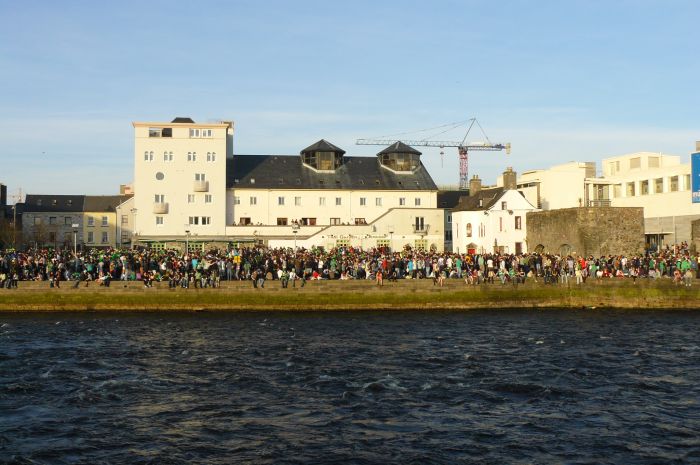 On Monday night, some 1,000 young people gathered near the Spanish Arch in Galway and were roundly criticised for doing so. But in vilifying them, we forget at our peril that those young people are also Ireland’s future.

They will pay for your retirement and will propel the country forward. They will take the risks, create the companies, music, art and culture of 21st-century Ireland. They will possibly manage and navigate the country towards a United Ireland.

It is the job of us, the older ones, to hand them a country better than the one bequeathed by our parents.

When the State has prevented them from attending college and closed down bars, clubs, gigs and house parties, rather than attacking them for an outdoor session, we should be nurturing them, basing our economic polices around them, tailoring spending and investment to them.

Young people are the key to our prosperity. Without a young population, a country runs out of steam, closing in on itself. In contrast, with a young population anything is possible, dynamism abounds, mistakes are made but great things are also achieved.

The good news this week – yes there is good news – is that Ireland is by far the youngest country in Europe. According to Eurostat, “Ireland was the most youthful member state in the EU 27, as people aged 0-29 years accounted for nearly 4 out of every 10 inhabitants at the start of 2019 (39 per cent). At the other end of the spectrum, the share of children and young people in the total population was lowest in Italy (28.3 per cent).

This is a cause for great celebration and, despite the pandemic, should give us confidence about the future. More critically, such a demographic dividend should be the centrepiece of the coming Budget 2021. The future population determines the future growth rate. The future growth rate of the economy forms the basis for any country’s budget. Budgets are about setting the parameters for the economy for years, not months.

Even more significantly, population dynamics profoundly affect the costs of investing. Traditionally, young populations have less money to start with, and save less as a result, so interest rates tend to be higher the younger the population.

Alas, you will hear nothing of this big-picture analysis in the upcoming budgetary jamboree. Instead, you will be forced to listen to language that misdiagnoses the economy as a large household, constrained by tax revenue. But the reality is that tax revenue comes after government spending, not before it. A government spends before it has money, the Central Bank makes the money available via the government debt market, and the money appears as if by magic.

It is then spent, and from that spending comes income, and out of that income come taxes. So taxes come after spending not before because the Government – via the ECB financing everything at zero interest rates – is the issuer of money, not the user.

Unfortunately, not many people appreciate this difference between issuers and user. It is far easier to see the national budget as some sort of giant weekly shopping account based on the idea that you can only spend what you have in your purse. Your family is a user of money but the State, using the ECB, is de facto an issuer of money. It can issue IOUs and get money in advance.

At zero interest rates, the only governmental constraint is the long-term growth potential of the economy, which is a function of the aforementioned young population. If you doubt this, why have interest rates continued to fall as borrowing has continued to rise? Tax revenue is not the constraint on borrowing. The constraint is future ability to pay, which again comes back to the young population.

If we don’t address their issues, such as affordable housing, young people will emigrate. Incurring the cost of educating them but not ensuring they stay here to return that investment would affect this country’s ability to pay back debts. This is why it’s much cheaper to spend now and tax later.

This idea that if we don’t create a decent economy with housing now, we will pay twice in the future, closes the circle. Not spending on infrastructure in the slump will cost even more in the future, as the young emigrate to find better opportunities abroad.

Today, the total cost to the State of educating a person all the way through to the end of third level education is (on the basis of my back-of-the-envelope calculations) close to €800,000. The cost of losing young people to emigration is therefore enormous. The prize of keeping them is unquantifiable.

The only fear we might have about front-loading spending now would be inflation. But inflation occurs when an economy is straining at the leash, not an economy that will end the year with 16 per cent unemployment, with domestic demand down 7 per cent and facing into a Brexit jolt on January 1st.

Budget 2021 should be hugely expansionary. An economy with one in six out of work and a far higher proportion of young people unemployed is an economy that demands stimulus. The ECB has instructed us to spend. The constraint is not a financial one, but a philosophical one. We are not looking at a failure of economics here but a failure of imagination, stemming from a lack of knowledge.

After spending so much on education, isn’t it tragic that the people charged with running the country are driven by outdated mantras rather than creative thinking?