The party that taxes land hoarding will get my vote 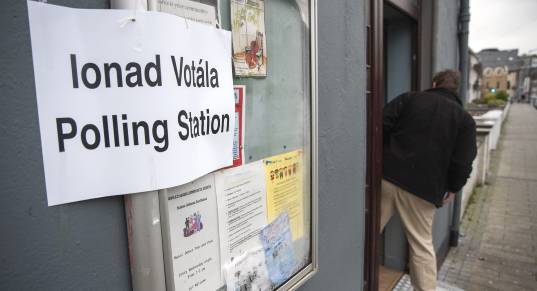 The imminent general election is likely to boil down to a showdown between the party of bricklayers and the party of bookkeepers.

In a country where we need to build housing yet keep within a budget, the bookkeepers will try to convince us that they can build, and the bricklayers will assert that they can balance the books. Which one of these voters believe will likely be the party that wins.

History shows us that there is no meaningful constituency for fringe politics here, whether it be left or right. Therefore, after all the debates, posters and policy promises, our proportional representation system is likely to throw up a Fine Gael (FG) government propped up by Fianna Fáil (FF), or a Fianna Fáil government propped up by Fine Gael.

Apart from their views on the Royal Irish Constabulary, the ideological and economic differences between FF and FG are wafer thin.

The parliamentary lesson from Brexit and the UK, is that being convulsed by radical right-wing nationalism and radical left-wing nihilism leads a country up a garden path.

The latest evidence of this nonsense is British prime minister Boris Johnson stating this week that he will go to war with the EU over fisheries, despite that fact that British fishing is less than 1 per cent of GDP, less than 0.5 per cent of UK employment and the British catch is eaten by Europeans.

Such “Dad’s Army economics” (risking a free-trade deal for some great, patriotic, British fisheries victory), is not what sensible countries do. Expect more political pantomime as the clock runs down again to a hard Brexit.

Record levels of employment, increased social spending and a general unwillingness to rock the boat, make it highly likely that Ireland will vote not radical right or radical left but for the radical centre.

When the rest of the world is lurching to extremes, beguiled by various strains of nostalgia, wanting to turn the clock back rather than plough forward, to do the opposite by steering a centrist, liberal course, is indeed radical. In an irrational world, where it is easy to sloganeer and look for quick fixes, it can be difficult to commit yourself to a rational, reasonably dull middle ground that is governed by realistic economic rules.

Let’s go back to the idea of bricklayers versus bookkeepers.

For years, Fine Gael, the bookkeepers, have been able to balance the books but they have a poor record on social housing.

In contrast, Fianna Fáil could build, most memorably, ghost estates, thousands of houses in places where no one wanted them. Yet, more than once, Fianna Fáil bankrupted the country. Ideally, if we could fuse the brickie bit of Fianna Fáil with the bookish end of Fine Gael, we might have something like stable centrist government.

With Ireland growing like it is today, we need inventiveness in the building sector to catch up with our massive infrastructural deficit. At the same time, when we are in an era of zero interest rates and we are in a monetary union, we can afford to be inventive in the financing sector.

For the bricklayers, in terms of housing and infrastructure, a growing country is, as I’ve said before, a bit like a teenage boy. There is no point buying trainers that are the right size; you need to buy them a size too big. Likewise, we need to build infrastructure, not for the current population of nearly five million but for a future population of 5½ million.

For the bookkeepers, in terms of balancing the budget, global zero interest rates and the fact that we don’t have our own currency means we can borrow much more, locking in lower interest rates without risking our financial integrity. This is particularly apposite when the domestic banking sector is (rightly) constrained by Irish Central Bank rules. Ireland can never again allow banks to be any more than a single-digit growth business. This means keeping their loan books in check.

Thus, there is a crucial role for the State or outside finance to fund house building.

The problem with outside finance is largely one of optics. If foreign landlords own much of the new housing stock, it doesn’t “feel” right. But if we police these owners fairly with proper management and regulation of the rental market, it shouldn’t matter who owns the stock.

The only fly in the ointment with this approach is the expectations of the owners of foreign funds. If they feel they can operate their Irish rental portfolios like a quoted company, sweating assets here, cutting costs there, then the State must protect the interests of its citizens over the desires of foreign capital.

It would seem preferable for the State to be the builder of last resort, raising a housing bond and sub-contracting the building to local developers. When we have a rental crisis and the offence of homelessness, we are at the last resort.

There is no more time. There are many ways of delivering housing and many ownership possibilities within this structure, but ultimately the State needs to do deals with developers, who are the only people capable of building.

Land that is being hoarded and not used should be taxed so heavily that it becomes impossible to hoard. In a new deal between bricklayers and bookkeepers, hoarding must be penalised – and penalised aggressively. This will drive down the price of land because it will cause a surge of land to be brought into use to avoid the heavy penalty of the new tax.

The party that runs on a meaningful hoarding tax platform will get my vote.