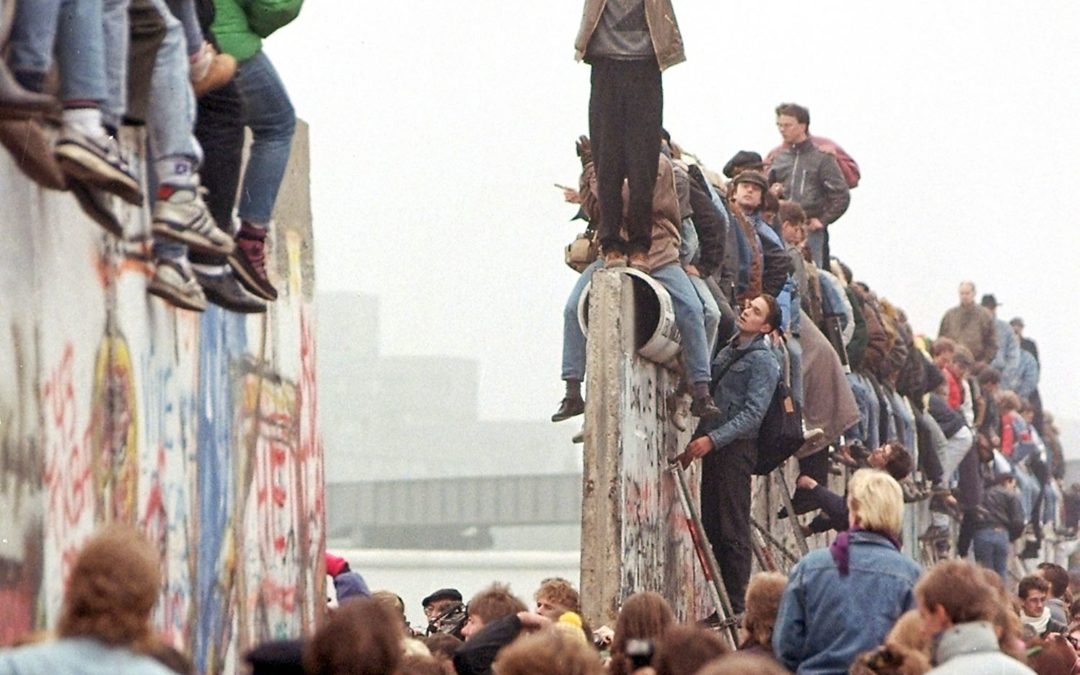 In terms of ramifications, who would’ve thought that one of the standout beneficiaries of the fall of the Berlin Wall would be Ireland?

This year marks the 30th anniversary of the fall of the Berlin Wall, the seminal geo-political event of my generation. No one, least of all the CIA, expected it.

In the 1980s, crossing Checkpoint Charlie into East Berlin was like going from light to shade, from multicolour to monochrome. This experience is extremely well captured by the TV series Deutschland 83 (well worth watching).

A few months before the wall fell, fascinated about what life must’ve been like in that part of the city where the lights went out early, I left Zehlendorf in West Berlin and headed on a student odyssey through the former DDR and Czechoslovakia.

Only months before its destruction, not one person suggested to me that the Wall was anything but permanent.

At that time, the grip and presence of the Communists on society seemed absolute. Over the weeks, I met distraught parents of political prisoners, jailed for the most innocuous offences; I hung out with a Dresden-based, East German, Thin Lizzy-obsessed biker gang; and I witnessed a handful of protestors beaten to a pulp by Czechoslovakian police on Wenceslas Square for commemorating the anniversary of the Prague Spring.

It was a parched central European summer of border guards, secret informants, Russian-built Ural motorbikes, mullets, double denim, and lots of polyester. It was also an August of legions of Trabants streaming towards Hungary following the reformist Hungarian regime’s decision to ease travel restrictions between the Soviet bloc and the West.

Despite this tiny chink, the system itself appeared immutable. State-run TV carried incessant news programmes extolling the bumper harvests of the year before, some five-year plan or other and, strangely, wall-to-wall coverage of Soviet high-jumping championships in the Ukraine. The police and military were ubiquitous; the bureaucracy stultifying.

In rural Moravia, local farmers complained bitterly but were resigned to living and dying under Czech communism, a nasty strain of the original affliction.

And then, out of nowhere, it all crumbled. It was Lenin himself who observed that “there are decades when nothing happens and there are days when decades happen”.

The world worried about the military consequences of the end of the Soviet Union. Germany reunited swiftly and – critically – backed Croatia in the impending Yugoslavian war. Under German influence, the EU quickly embraced new ex-communist democracies.

France, worried that Germany would pivot further east, dusted off a fantasy plan for a single EU currency that even the most committed Europhiles accepted was a bit excessive. But it happened.

As the EU enlarged, various treaties copper-fastened further EU integration, spooking Conservatives in England, but only the extreme wing of Euroscepticism dared to dream of Brexit. But that also came to pass.

While much of the attention focused on big geo-political developments, something else, something arguably more long lasting, was going on. The world was globalising.

People and capital were on the move at a pace not seen since the first great era of globalisation between 1870 and 1914. Countries that opened themselves up to the opportunities that such global dynamism afforded began to shine.

Up until then, small countries, with small economies and small markets, were restricted by the tyranny of geography and the limitations of size. Once markets opened and trade flourished, the game changed. As new markets opened up in Europe and later Asia, American multinationals, buoyed by the prospect of millions of new customers, moved to set up closer to these markets.

Suddenly, being close to the action wasn’t that critical, as transport costs in services are almost zero. What was important was having the right tax structure and having the right talent. If a location could offer that, it would flourish.

Ironically, one of the paradoxes of globalisation is that in a borderless commercial world, sovereignty is more important than ever. Countries that engineer the most corporate-friendly policies will garner huge upsides. These upsides generate economic growth.

In the absence of economic growth the standard of living stagnates, women remain in the home and things we take for granted – central heating, electricity, foreign travel, laptops, mobile phones, large-screen TVs to watch the World Cup final, the eradication of TB, the elimination of measles, the flu vaccine, braces, skinny flat whites, avocado toast, free education, bus lanes, burrito bars and the old-age pension – are simply not possible.

The latest Globalisation Report by the Bertelsmann Stiftung provides a simple index of the extent to which a selection of countries have become globalised over the past quarter-century or so. This index takes into account both economic and social interconnectedness, as well as how politically integrated a country is with the world.

While this is just a subset of the larger database, Ireland ranks the highest on this globalisation index, followed by our European neighbours in the Netherlands, Belgium, Switzerland and Denmark.

This study calculates the impact of an increase in globalisation on the growth of real GDP per capita across 42 countries between 1990 and 2016.

It isolates the 10 countries with the largest average annual gains in real GDP per capita due to increasing globalisation. The largest average income gains are found in Switzerland and Japan, where they rose by an average of €1,900 and €1,500 per capita and year, respectively.

Globalisation has been very good for Ireland. Before the Berlin Wall fell, Ireland was terrorised by the small size of our home market and the absence of a domestic capital base. In addition, our labour force was limited to Irish talent. Once the wall fell and globalisation took root, we took off.

In 1989, had you asked which countries would benefit most from the collapse of communism, Ireland wouldn’t have featured. But we did; and it all started here in Berlin.