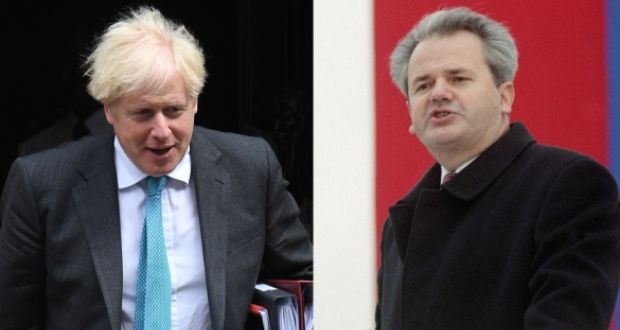 We could be witnessing the beginning of the end of the United Kingdom. The centrifugal forces of competing nationalisms are strong enough to recast the old order and to redesign this part of the world in a way that has not been seen since the Tudor era, when England started its Imperial project in Ireland.

The centre now struggles to hold because nationalism is being driven by the centre. Nationalism is now Whitehall’s default position.

Contrast the UK, a nation of three countries and a disputed bit of another one, with Germany or France. Neither of these countries faces competing nationalist movements demanding constitutional change. Today these are culturally largely coherent countries, although they too are made up of smaller pre-existing countries and identities.

Italy has no real separatist movement; the Northern League dropped that long ago. Spain may have Catalonia and possibly the Basque country, but while Madrid has made many mistakes, it has not committed the error of exiting the EU.

Spain, Italy, France and Germany have the subtlety to understand that the EU is a force for unity precisely because, warts and all, it offers a form of dignity to smaller, once pushed-around countries.

At critical times, leadership is crucial.

In the past three decades, one European empire and two European countries have broken up. The Soviet Empire broke up and, in its wake, two countries separated: Czechoslovakia and Yugoslavia.

Socialist Yugoslavia was implacably opposed to Moscow, having broken from Stalin in 1948. The Czechoslovaks tried to do something similar in 1967 and were invaded by the Soviets for their troubles.

Tito’s Yugoslav partisans were a different proposition. After they obliterated 10 Nazi divisions in the second World War and suffered (on some estimates) more casualties per head of population than Russia, not even Stalin was prepared to take them on.

So when the wily Tito kicked out Soviet advisers and turned his back on Moscow in 1948, Stalin, despite being at the height of his powers, stopped short of invading Yugoslavia. Initially isolated, Yugoslavia forged non-aligned, third-way, international alliances with countries as diverse as Indonesia, Egypt, Iran and Sweden.

When both Czechoslovakia and Yugoslavia broke up, under the pressure of ethnic tensions between their various nationalities, they did so in profoundly different ways. In both stories leadership was critical.

Czechoslovakia was blessed with president Vaclav Havel, the dissident poet, respected by all and a figure who tried to keep the Czech and Slovak nationalists in check. Havel was part of the negotiations to the end, appealing to both factions to keep the country together. He listened to all sides and his efforts and diplomacy ensured a civilised, peaceful split, which became known as the “velvet divorce”.

His job done, Havel resigned, siding with no ethnic group or nationality, despite himself being Czech. In the end, the break-up of Czechoslovakia was supported by less than 40 per cent of both countries. The deal was done in a radical parliament, not by popular plebiscite.

If countries are going to break up, this is the way to do it. The lesson is that personalities and leaders count – and this is why Britain feels much more like Yugoslavia.

In the end it was Serbia, the biggest country, the one that should have been the ballast in the Union, that went rogue under the guidance of a narcissistic leader. Once Serbia decided that it was the victim, the writing was on the wall.

Unfortunately for the UK, part of the Brexit narrative casts England as plucky victim, a status fuelled by Boris Johnson’s manoeuvring. At every stage of the Brexit negotiations, the victim card is played, with the EU portrayed as mendacious and plucky little Blighty painted as innocent.

Today, many in the “Yugosphere” argue that Yugoslavia could have survived as a looser confederation had politicians managed the situation with more maturity and foresight. Alas that did not happen.

More than any other politician Slobodan Milosevic was at fault. In order to get himself elected, and to out-manoeuvre his internal opponents in the Serbian communist party, the previously communist and cosmopolitan Serb leader Milosevic identified with Serb nationalists in Kosovo.

He weaponised the grievances of a small isolated minority rather than prioritise the interests of the majority, wrapping himself in the Serbian flag. He made the Serbs exclusively his cause, rather than talking to leaders of the other republics, particularly Croatia, Slovenia and Bosnia.

This simply fuelled nationalism in the other republics as they saw Serb-dominated Yugoslavia being unrepresentative of the whole country – a place run by a cabal of Serb nationalists with an exclusive vision of what Yugoslavia was to become.

The UK is not Yugoslavia, and Johnson is not Milosevic, but there are parallels. Actions at the very centre of power in the UK are exacerbating nationalist tensions and cultural anxieties in the other countries, rendering the whole of the UK more fragile.

This is not to say that the UK will end in war and genocide as occurred in Yugoslavia; rather it is to point out that countries do break up and, typically, the disposition of the centre of power determines how that breakup occurs. The Czechs went for mollification and understanding, the Serbs for confrontation and brute force.

If you look at the rise of nationalism in the UK over recent years, you see similar developments. As the Conservative party became increasingly pro- Brexit, the opposite happened in Scotland and Northern Ireland. Wales, always harder to call, is more like Montenegro in the Yugoslavian context, which like Montenegro with Serbia, is perhaps a function of its size and proximity to England.

In Scotland, the SNP’s vote has risen from 19 per cent to 45 per cent in the past decade. This mirrors the surge in the Brexit-vote in England. In 2010, only 3 per cent voted for Ukip and Brexit; last year, 47 per cent voted for the Conservatives under the Get Brexit Done banner. We are witnessing the Balkanization of Britain.

The warning from history is not that the war in Yugoslavia could be repeated in the UK; it is about the way countries separate.

Countries rarely break up from the periphery; massive change comes from forces unleashed by the centre. When you have competing nationalists, the aim of the centre is to manage the change, to offer choices, options and understanding. If the endgame is divorce, the sensible Czechs show the way. The worst thing to do is make a drama out of a crisis.

Looking at London, drama, posturing and theatrics appear to be the chosen route. All this would be humorous if it wasn’t so serious, for us all.