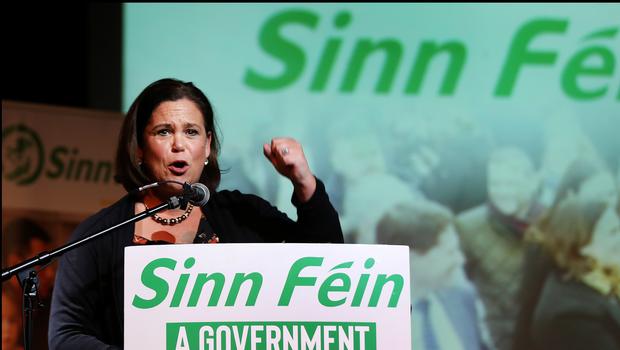 The excoriation of Sinn Féin in recent days seems to be directed from the top, with the intention of softening the ground for a Fianna Fáil-Fine Gael coalition. ABS (“Anyone But Shinners”) certainly gives cover to both leaders, allowing them to ask their followers to hold their noses and do the deed with each other, based on having no alternative.

At this level of historical intricacy, the rift among the faithful is quasi-religious, between defenders of the faith and waverers, between traditionalists and modernisers. The schism pits Fianna Fáil’s “Sinn Féin” wing of old Republicans against its Fine Gael wing (the party formerly known as the Progressive Democrats). It’s like George Colley versus Charles Haughey with a bit of Juan Perón thrown in.

For Fine Gael, the rupture is more opaque: it pits the Cosgrave wing against the Dukes wing with a bit of Michael Heseltine thrown in.

For the rest of us, it’s immaterial.

In terms of policy, there’s nothing between Fianna Fáil and Fine Gael. That is, economically there’s nothing; culturally, there is. And this is where it gets interesting.

One of the quirkier analyses of the fundamental difference between the two parties was undertaken, appropriately enough, by Des O’Malley’s son, the political academic Eoin O’Malley, who in 2011 analysed the surnames of the TDs elected to each party.

It’s about class, land and status in pre-Cromwellian Ireland before the country was carved up by the New Model Army’s NCOs, who abandoned the austerity of their leader to don the powdered wigs of the cavaliers. After a few hundred years they abandoned ship, leaving us back among ourselves – if you’ll forgive a little simplification.

Once the common enemy was gone, we went back to tribal allegiances, which became Fine Gael and Fianna Fáil. Now, the rise of Sinn Féin has pushed the two together.

However, neither party is innocent when it comes to explaining Sinn Féin’s electoral rise, or indeed their own demise.

Arguably, Sinn Féin’s 2020 election is a result of the rise of the “contented class” – people who have done well over the past 50 years and who are the bedrock of Fianna Fáil and Fine Gael support.

The contented class are not the 1 per cent that Bernie Sanders targets, but rather the 20 per cent of “I’m-all-right-Jacks” at the top of society.

The 20 per cent are those who benefited from the past 50 years of economic growth, and have voted for Fianna Fáil or Fine Gael. In the past 40 years Ireland has experienced the fastest socio-economic uplift of any European country according to the metrics of health, wealth, education and income.

From the later 1970s, the contented class embraced upward mobility, setting up new businesses, achieving education levels previously unheard of and taking commercial risks, as the economy developed from an inward-looking backwater to an outward-looking European state.

Now that the 20 per cent are on top, they are content to pull up the drawbridge and be left alone to walk the Camino in peace. Prosperity has led to change-resistance and inertia. The contented class now follow a political philosophy we could call “Citizens Against Virtually Everything” (or Cave). Let’s call them cave-dwellers.

They oppose developments, slow down infrastructural projects, and form highly effective residents’ groups to protect what they have and to amplify their status. Opposing development undermines the property market as it prevents developments in “sought-after” areas – sought after precisely because they are perfect for development.

These are places with good transport, hospitals, schools and amenities. Cave-dwellers send their children to private and grind-schools, undermining the democratic aims of the education system, leading to a disproportionate amount of wealthy kids in our best universities.

Plus, the cave-dwellers use their networks to propagate their own class in the professions by parachuting their children into their friends’ workplaces.

All this is understandable; why change when you have it all going for you? The problem is that continuing the social mobility of the past 50 years demands economic dynamism. Holding on to what you have demands inertia.

This is driving a wedge between the 20 per cent and the rest, which is precisely the gap that Sinn Féin is exploiting.

In addition, the cave-dwellers understand that in our PR system, votes count and a good local protest can gum up the democratic process. Politicians don’t want to upset any voting bloc and therefore they have evolved from being leaders into followers intent on self-preservation.

Their governing principle has morphed into “Not in My Term of Office” or Nimtoo for short.

This conflict is the core of the political and economic dilemma facing Ireland now. When voters, particularly younger ones, hear Fianna Fáil and Fine Gael aficionados droning on about their golf-club differences, they immediately switch off, understanding that the Fianna Fáil-Fine Gael nexus has helped create the problem by being hostage to the contented cave-dwellers.

The two “main parties” created Sinn Féin’s electoral juggernaut. It’s up to them to figure out how to stop it.