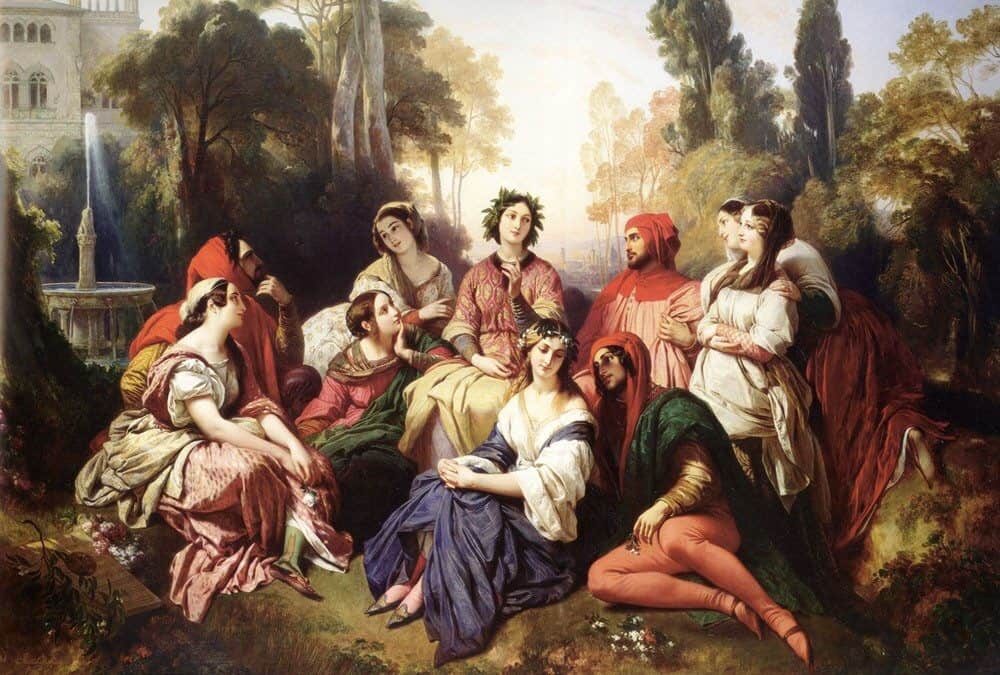 When the battle is eventually won, Covid-related debts will not be treated like some sort of post-armistice reparations to be levied on entirely innocent citizens. Such carry-on won’t pass electoral muster.

Otherwise Italy will default, the euro zone will atrophy and the EU will struggle to prevent itself unravelling. The stakes are that high. Ironically, the solution is really quite simple. Let’s come back to that later.

For now let’s focus on the longer-term changes that might be unleashed by the virus. These changes will not necessarily be limited to health and economics. In fact, if we take a long lens and examine the way societies reacted to previous pandemics, there are reasons to be optimistic about the energy released by such a dreadful global experience.

Take the Black Death for example, which killed possibly more that 40 per cent of all Europeans after it had devastated the Byzantine Empire. Once in Europe, the plague moved swiftly from the toe of Italy, ravaging all in its wake.

The trauma unleashed an enormous change in thinking, literature, art and culture, from The Decameron by Boccaccio, itself a story constructed around a fictional group of 10 people fleeing the plague outside Florence. They told each other 10 stories over 10 nights, leaving 100 tales in all.

The Decameron is not only well worth the read, but its stories also reveal just how cosmopolitan the world was before the plague. The friends exchange stories about Cairo, Baghdad, Paris, Constantinople and Alexandria, showing us that these people travelled, traded and were well aware what was going on over a huge expanse of territory.

The years following the Decameron saw a revolution in art and enquiry. Within a generation or two, we had the Renaissance, resulting in the emergence of Michelangelo and Leonardo da Vinci. Financially, we saw the emergence of Italian banking which unified Europe via trade in a way that had not been seen since the Roman Empire.

Incomes and living standards sky-rocketed after the plague because the fall in the labouring population drove up their wages and, the higher your wage, the more likely you are to take time to educate one of your sons or even yourself. These forces were transformative.

The 1918-1920 flu was followed in the US by the Roaring Twenties, a period of extraordinary artistic, cultural and literary outpouring. In tandem, the US experienced a surge in technological innovation which transformed the society and particularly the urban landscape: electricity, the telephone, the Model T Ford, and an innovation that we don’t think too much about, the elevator, which changed urban architecture more than anything else. (By the way Ireland, with its low-rise obsession, has yet to discover the wonders of this 1920s technology.)

In Europe, the pandemic was followed by the Weimar Republic in Germany. Possibly the most artistically experimental state ever in the world, it extended boundaries in psychology, mathematics, painting, literature and philosophy. Of course, politically, the 1920s in Europe was the era of the great march of communism, whereby socialism and Marxism grabbed the imagination of millions of people, from George Bernard Shaw to Picasso, all looking for a new world order and a new way of organising society.

Naturally, it is impossible to disentangle the first World War from the pandemic, in terms what was more influential. We should allow the historians to unpick that one. However, what is clear is that trauma was followed by inspiration. Even the, now forgotten, 1958 flu pandemic was followed by the liberation of the Swinging Sixties.

Geo-politically the Black Death and the 1918 pandemic ultimately led to a massive reorientation of trade, globalisation and the flow of finance around the world. The aftermath of the Black Death saw Europe turn away from the Silk Road towards the Atlantic and America.

When the Europeans traded with India, Borneo and China, they sailed there via the Cape, bypassing the tricky Ottoman Empire. Globalisation profoundly changed after the Black Death, the world tilted on its commercial axis.

Similarly, after the 1920s, the era of free trade that had characterised the world economy since 1860 ended abruptly in the 1930s with tariffs, capital controls and currency devaluations. Obviously, the Wall Street crash is always identified as causing the slump but it was itself a consequence of the easy liquidity fuelling the economic effervescence of the 1920s.

The proxy war between China and America, which was limited to trade and technology transfer up to now, risks crystallising into a full-blown cold war. This week’s clash over Hong Kong is a new departure. Donald Trump needs an enemy to fight his re-election; while in Beijing, America-bashing is a proven weapon to take the sting out of the post-coronavirus economic lethargy.

Ultimately, two great powers – one in the ascendancy, the other descending – rarely pass like ships in the night. The Sino-American quarrel will lead to less globalisation, not more.

This is a threat to small trading countries such as Ireland because small countries have always needed to transcend the limitations of geography and size. Globalisation was a boon for us. In fact, there are few small countries anywhere in the world that have benefitted as much from globalisation as Ireland. Now we need to rethink and come up with a new plan as to how we play the supply chain game. I’m not hearing this plan. Are you?

Previously, I’ve written here about tax-for-equity plans to reframe our relationship with multinationals. As long as tax is sovereign within the EU this is doable. We have far more to lose than any other EU country. An element of policy urgency would be reassuring.

It is essential that austerity jihadis deep within the Irish establishment don’t impose tax increases and spending cuts on an economy that’s barely breathing. The solution to this is obvious. It is called Japan. In this extremely wealthy country, for the past generation, the central bank just keeps its discount window jammed open and accepts government debt as collateral at zero interest rates. The European Central Bank simply does the same, as it has been doing recently. Problem over. Central banking 101. First-year college macroeconomics.

When Japan experiences inflation, give me a shout. You know where to find me.