Covid-19 and Zoom will not finish off Dublin 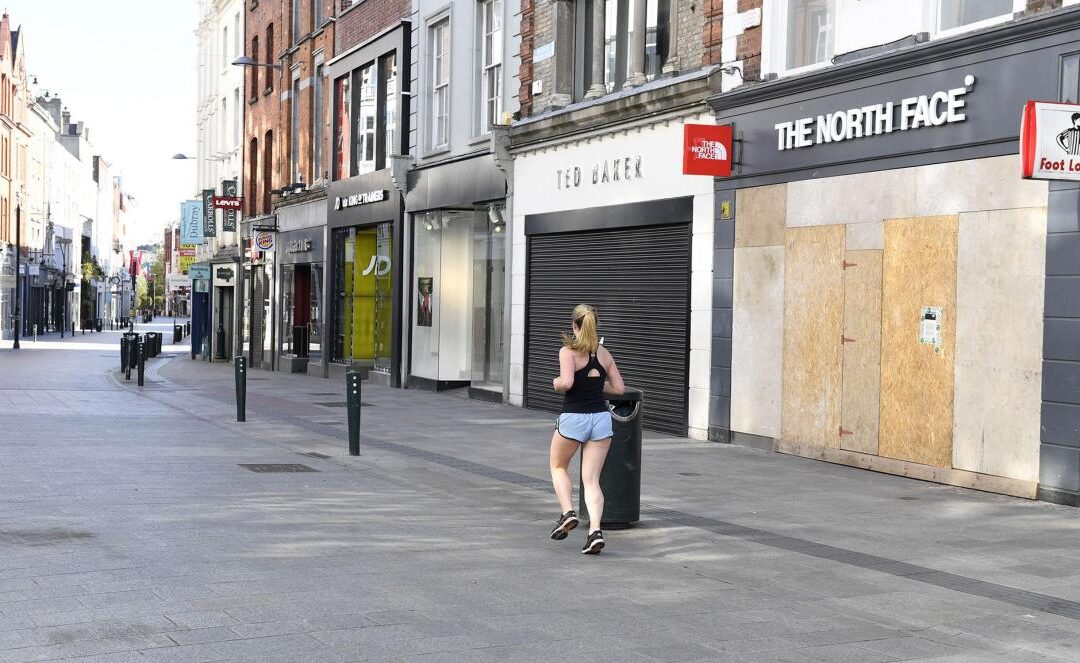 We need to take a breath regarding the “end of the city” narrative. It takes quite a bit to finish off a city. Berlin was reduced to rubble, yet it rose again. If carpet bombing couldn’t destroy the German capital, Covid-19 and Zoom will not finish off Dublin, although their impact on the city will be profound.

Change happens when technology and culture move in the same direction. Technological change is never enough to drive social change. It is necessary but not sufficient. There needs to be cultural buy-in too.

The pandemic has given us that cultural shift. We know we can work from home. Employers understand that productivity doesn’t drop. Companies save on rent, heating and other expenses associated with hosting hundreds of people in one space.

The office-commuter model of life is over. It is likely to be replaced by a blended week. And, if the number of packages delivered to this home is any indication, city retail is in severe danger. Shops will become at best showrooms, while stock will be held in depots. Both these trends – slimmed-down retail and part-time office hours – mean that huge tracts of the city centre space will become idle, quite quickly.

All the while, demand for housing will surge. The city needs to transform itself swiftly from a shopping and work entrepot to a living, artisanal centre, where people reside, and things are created. Leisure and entertainment – bars, restaurants, theatre, arts venues – as well as casual office pods will be the driving forces of urban activity.

Significantly, no one is waiting for Dublin to get its act together. Rural Ireland has its own agenda. The pandemic has been an eye-opener to what sort of lifestyle is available in smaller towns and villages.

If you can work, hang out and live well in smaller towns, why live a dormitory existence? Why leave a building that is full at night and empty all day, in order to fill another building all day only to leave it empty all night? This is a highly inefficient and expensive use of space.

Anecdotal reports of busy cafes and brisk refurbished office demand in places such as Navan, Wicklow, Carrick-on-Suir, Kilkenny and Enniskillen indicate that many people who can work remotely are choosing a different life. The shift is on.

The city no longer has a monopoly on the best experiences. Almost half of Ireland’s Michelin stars – including this week’s new one for Dede in Baltimore, Co Cork – are now for restaurants outside the main metropolitan areas.

Dublin has to turn itself into an experience for residents and visitors. The “Made in Dublin” badge has to stand for something unique.

Here are three instruments that could transform the fortunes of our capital city and its currently empty city centre.

Dublin must transform how its land is used, and it needs money to direct this change quickly. This transformation has to be led by people with “skin in the game”, people whose careers depend on navigating the city through this reinvention.

It is an economic powerhouse that demands a directly elected mayor with tax-raising powers. Right now, in terms of who gets what in Ireland, Dublin generates €22 billion in revenue, but only €16 billion of this is spent in Dublin – and no one knows precisely how much on what. This would be the primary job of a mayor’s finance department.

The second and related issue is land. But what might seem to be a problem is in fact a great opportunity. With the land left idle from shrinking retail and office demand, we have to manage the expectations of the owners. Landlords – previously used to upward-only rent reviews – will have to lower their expectations.

Unfortunately, history suggests that landlords hoard land when times are lean, in order to prevent rents – and thus valuation – from resetting downwards. If they are not leveraged, they can do this. This means, counterintuitively, hoarding increases when the demand for land falls.

Economic theory predicts the opposite but, on this, like on so many other areas, traditional economic theory is so way off the mark as to be faintly embarrassing to the trade.

Incidentally, hoarding is a close relation of dereliction. There is a real danger that a Dublin that drags its feet in response to the coming urban transformation will become derelict as landlords remain in denial. As this column has argued before, dereliction is a sign of wealth not poverty. Only the truly wealthy can afford to allow an asset, such as a building, to lie idle.

So how would a Dublin mayor with tax-raising powers encourage land use rather than land hoarding? The mayor would make it expensive to hoard by a “site value tax”. This is a tax on the site, not the building. The underlying value of a site – not building costs – is what determines excessive land prices.

The building costs of building a house in Darndale would be the same as building the same house from scratch in Donnybrook. Furthermore, site values are generated by the collective not the individual owner. The reason Grafton Street is expensive is because our footfall has made it so. We make it sought-after, yet the value is captured by the individual owner.

Grafton Street is also made expensive by public transport that funnels people into it. Public transport is paid for by your taxes, yet its value is garnered by an individual property owner. We could go on about amenities such as Stephen’s Green, Trinity College, the trams, the drains, the gardaí on the beat, the corporation cleaners and the like – all public services paid for by the taxpayer – yet the capital value is captured in the property despite the fact that the property owner does not contribute anything extra to these costs, other than perhaps rates. Site value taxes would stop hoarding in its tracks. Land would be brought into use, and the city would blossom.

The revenue from this site value tax could be ring-fenced for the first Dublin municipal bond, which would be raised to upgrade infrastructure for the rest of the 21st century. The underground, building social houses, moving the port, building a new city by the sea and all these initiatives which would transform the city can be self-financing with a bit of financial imagination.

Municipal bonds are the usual way cities finance themselves. In the US in 2018, local government issued $249 billion (€218 billion) worth of municipal bonds, financing large-scale public investment such as roads, hospitals and schools.

Dublin could borrow at interest rates cheaper than most European countries. Slovenia just borrowed for 60 years at 0.7 per cent this week. Dublin’s GDP – on the most conservative measure – is three times larger, and its tax take of €22 billion is bigger Slovenia’s €18 billion.