A Swift lesson in Irish economics 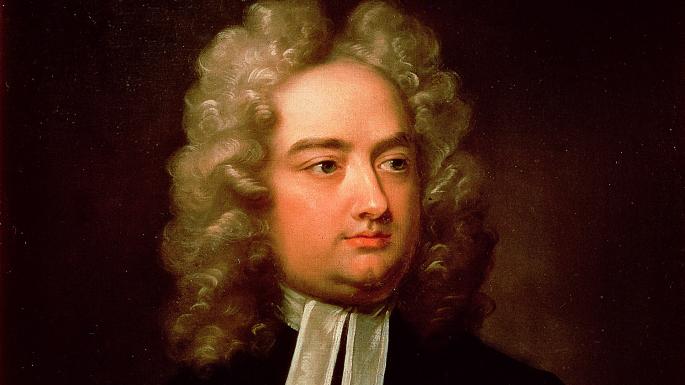 Today is Dean Jonathan Swift’s birthday. He was born on November 30th, 1667, in the parish of St Werburgh’s in Dublin. Last weekend, I was asked to speak at his cathedral, St Patrick’s, as part of the Swift Festival.

It’s not every day you share an altar with the Archbishop of Canterbury, Justin Welby (or indeed, with a former president of this country, Mary McAleese). The subject was identity and, specifically, Irish and British identity after Brexit.

Given the enormous constitutional upheavals that could be triggered by Brexit, not just in Britain between England and Scotland but obviously on our island too, “conflicted identity” may become a political buzzword of the third decade of the 21st century.

Swift was not only a satirist, but also a keen observer of economics, and his insights are still relevant today.

Swift’s own identity was initially conflicted. He referred to himself as an Englishman stolen and brought to Ireland, even though the facts appear to have been a bit different. Swift was born in Dublin. His father died before he was born.

He was brought to England as an infant and returned to Ireland at the age of one. Although at Kilkenny College he regarded himself as a bit of an outsider, and even referred to himself as a “large fish out of water”, ultimately it was as an Irishman that he became famous.

At the height of his satirical powers in England he was unambiguously seen as Irish. By his death, Swift’s reputation as the wicked Irish wit who poked fun at the English was unassailable. And in later years, the man who aimed to Anglicize Catholic Ireland to Anglicanism was adopted by both Wolfe Tone and the Young Irelanders as a symbol of Irish nationalism.

His experiences show that identity is fluid and that great economic upheavals change outlooks and allegiances. The early 17th century was a period of enormous economic and political upheaval in Ireland. Swift’s later writings on finance and industry attest to his keen awareness of the economic forces around him.

The early 18th century was the beginning of what could be termed the British project. In 1707, English nationalism led to the incorporation of Scotland and a union of the Scottish and English parliaments in London. After Ireland was subjugated and colonised completely following the Battle of the Boyne, this union began to project its power far beyond these islands.

Despite a system of apartheid in this country during the Penal Laws of the 18th century, the empire expanded under the banner of democracy, enlightenment and fair play!

Thus began the global colonial project, about which some of today’s more excitable Brexiteers reminisce, referring to their imagined post-Brexit world as a buccaneering global adventure – all high seas and free trade. This image of Britannia ruling the waves is at odds with today’s Britannia which tends to waive the rules, but I suppose every movement needs an image and maybe an invented past.

A more sober assessment might be that Brexit marks the end of this British project of 300-or-so years. It expanded in Swift’s time, peaked in Wilde’s era and was in decline by the time Beckett choose Paris over London for exile. The project got a shot in the arm with the second World War, but went into decline quickly thereafter.

Like the Roman Empire, the British one frayed at the edges, and then gradually its stitching unravelled until it came apart at the seams. The rump is the diminished state called the United Kingdom.

Looking forward, the next Scottish independence referendum might well untangle the 1707 Act of Union, leaving England back where it started in the mid-17th century.

As in Swift’s time, the economic symphony playing away in the background is crucial. Back then, two huge forces were at play. The first was a massive shift in European economic power from the Mediterranean to northwest Europe. (Today we see another economic power shift, this time to Asia).

From the Renaissance to the late 17th century, Spain and Italy were the fulcrum of European economics. The Spanish were buoyed by untold riches from the colonies in South America, while the Italian, bolstered by the city states of Venice, Genoa and Florence, excelled in banking, manufacturing and textiles.

However, this was to be challenged by growth in Holland and then England because the Italians never traded the oceans like the Dutch and the English, who brought back the finest materials from the Orient and then traded them with the rich Spaniards, who were happy to spend the gold taken from the Americas.

The second and related shift was from land to trade. Wealth had been tied up in land for centuries, but once the world started trading on a large scale, real money was made in buying and selling, manufacturing goods and flogging all around the world.

And of course slaves were also a significant commodity of this traded economy.

This was the first age of globalisation and the expanding Dublin of Swift’s time was a Dublin of coffee houses and sweetened sugars from Barbados, silks and spices, teas from China, manufacturing tools from Amsterdam, books and pamphlets from Boston. With the globalised world came globalised risks.

Swift also lived through and lost money on the world’s first global financial boom and bust, the South Sea Bubble of 1720. No more than in the Celtic Tiger, the South Sea boom created in Dublin appetites for all classes of showy luxuries, most notably in women’s fashion.

Indeed Swift was something of the puritan and took against the craze for women wearing foreign clothes. He advised the House of Commons in Dublin to “exclude all silks, velvets and calicoes, and the whole lexicon of female fripperies” and went on to describe opponents of these measures as “enemies of the nation”.

The times sparked Swift’s interest in economics, and he wrote extensively on money and exchange rates, agitating for Ireland to have its own currency. In particular, he argued for Irish economic development.

Swift understood that the world was changing and that the interests of the land-owning class being elevated over the interests of a craft class (and ultimately a manufacturing class) would condemn Ireland economically. In short, he understood globalisation. He believed that the Anglo-Irish aristocracy, particularly the absentee landlords, were not only greedy, but stupid. They wanted to keep Ireland agrarian so that they could extract as much rent as possible from the land and thus had no interest in manufacturing.

Without manufacturing, in a world of flourishing global trade, the economy became mired in low-value-added agriculture. For 200 years, the interests of the landed aristocracy, many of them absentee, destroyed economic potential.

How the world works

Swift appreciated that for a small country it is critical to understand how the world works and your place in it, so as to maximise opportunities. Small countries have always profited from trade – the more sophisticated the better. We use all the tools at our disposal to achieve this.

Fast forward to today; multinational companies have transformed our capital base, created entire new industries and plugged us into extraordinary global networks. You have only look at the announcement this week of Intel’s new €3.6 billion manufacturing facility.

And yet we listen to the lunacy of people suggesting that multinationals are a source of commercial instability and worse. What would Swift have made of this line of argument? Not much, is my guess.