A fall in house prices should be our goal 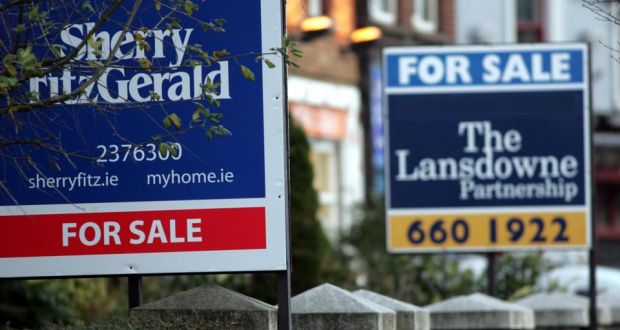 Housing should be the defining issue of the upcoming election, but for Fine Gael the most recent developments on housing policy might be too little, too late.

Latest figures show we are building more houses than at any time in the past 10 years. A favourite indicator of mine to assess house building is the ESB grid connections, which show new homes signing on to the electricity grid.

It shows an 81.1 per cent increase in apartments completed in the third quarter of 2019, compared with the same quarter in 2018, rising from 598 to 1,083. Apartments are now almost at the level of single dwelling completions.The number of scheme dwelling (estates and complexes) completions has risen 16.6 per cent annually to 3,311 in the third quarter of 2019, while single dwellings increased by 5.4 per cent to 1,273.

In terms of what is coming down the tracks, figures show 20,000 new commencements in the first nine months of 2019, up 22 per cent on an annual basis. This includes 6,474 in Dublin, up 18 per cent. While this is an improvement, it’s still way below the estimated 30,000 units needed annually to keep up with population dynamics.

Housing is not just an immediate accommodation issue. The obsession with home ownership has jaundiced so much of our economic and political discourse over the past five decades that it is now one of the single biggest impediments to social development.

This week’s Economist magazine includes a timely study outlining the burden that home ownership is putting on the English-speaking economies in particular. Ireland certainly suffers from this.

Mass home ownership is reasonably new in Ireland. My grandparents, like many other Dubliners up to the 1950s, rented their home. This was normal. In the 1960s, Ireland tentatively adopted the US and UK model of mass home ownership. The idea was that home ownership gave people a stake in the society and would thus make for more responsible, stable citizens and more stable politics.

Of course, the main beneficiaries of this were developers, builders and land owners – all of whom saw their balance sheets enhanced by the commercialisation of the suburbs. The other big beneficiaries were banks, because home ownership means mortgages.

From the 1950s to 1980s, Ireland operated a twin housing policy of building both private and public housing. Since the 1990s we have seen a clear bias away from public housing towards the private market as the preferred growth area in housing. Such a move has amplified the “unintended consequences” of private housing.

First, overreliance on home ownership splits the population between those who own houses (and want prices to go up to enhance their wealth) and those who don’t (who want prices to fall to minimise their future debt). The very same people who are in the latter camp today will migrate to the former after they buy property.

Obviously as house prices rise and housing wealth rises, the desire to protect that wealth rises too. So we see home owners moving against further development in their area to preserve their area’s exclusivity, leading to “nimbyism” (Not in My Back Yard) and “bananaism” (Build Absolutely Nothing Anywhere Near Anything). As wealth rises, so does organised obstructionism.

Based on Central Bank figures, net household wealth in Ireland rose to €780 billion in the second quarter of 2019, equating to €158,574 per capita. Residential housing wealth amounts to €537 billion worth of this.

Homeowners will move to protect their wealth. They obstruct development and hoard development land, which means that as housing demand goes up in cities, supply doesn’t go up in response – prices rise instead.

In short, the laws of economics are turned on their heads.

Since 2012 house/apartment prices in Dublin have risen by 90 per cent and 80 per cent respectively (a little less in the country at large), while wages have only increased by 18 per cent. If you own a house you are laughing; if not, you are locked out.

It doesn’t have to be like this. For example, Tokyo-Yokohama (the world’s largest metropolitan area, with a population of 38 million) has managed to keep house price inflation below 10 per cent for the past three decades because its planning laws respond to demand.

Singapore releases land when demand increases, because the State owns most of the land in the country and, as demand rises, the State sells.

Switzerland encourages local development and its house price increases are among the lowest in Europe, despite that country’s vast wealth. In all cases, supply of land is flexible. In Ireland it is completely inflexible and because of the wealth/residents lobby, supply dries up when demand shows up.

This is driving young people – and political parties – to desperation. Elsewhere, the inequality that home ownership embeds is driving populism. It’s only a matter of time before this political contagion infects Ireland.

The rule is simple: fix supply and you fix housing. Reverse the split in the society between those who own and those who don’t, build public housing immediately and, finally, make house price deflation – not inflation – the goal of public policy. This demands a sea change in our attitude towards home ownership.

In the 1960s, home ownership was introduced to give more people a stake in society; today nothing is locking out and alienating our citizens more. It’s time to change.